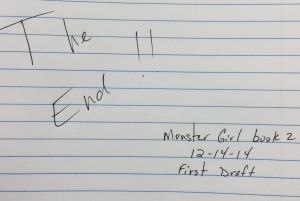 Something I like to do as a memento for myself is take a picture of the words “The End” and the date on a blank page for whatever first draft I just finished writing. Since I write all my first drafts longhand, those notebooks make great keepsakes of the time I spend with each story. All of my film scripts were written this way, too. As much as I don’t enjoy transcribing, I feel a certain magic that I can’t live without when I touch pen to paper that I don’t get from a keyboard. There’s an interesting experiment with this that I tried recently, and I’ll blog about it soon.

As for the sequel to “Monster Girl“, this has been a tough one to get through. I hit a snag around the middle of the book, and it was tough to keep going, but I was determined to finish the story. However, by the time I got to the resolution, I didn’t like where it had ended up. It wasn’t true to the story and it wasn’t true to Viki. So, after rewriting the last half, I’m happy to say that the first draft of “Monster Girl Book 2″ is finally in the can!

That’s film speak for “the movie has been shot”, and now I’ve got my work cut out for me over the next few weeks as I revise and edit, but I’m excited to see this first BIG step accomplished. It’s always a huge relief when I get that initial telling down in print. I’m a fan of the school of thought that believes there are three drafts, or steps, to telling a story:

I don’t know who came up with that, but it’s genius. It also reminds me of filmmaking, as movies are made three times: once in script form, then during the actual production, and then in editing. As I said, it’s a relief to see this first step completed. The first draft, or vomit draft as I like to call it, is always the hardest. Self doubt and all sorts of negative thinking creeps in while writing it. My internal critic can be such a nuisance. So, it’s invigorating to get that first draft completed, and it always lights a fire under me to get to the next step of re-writing so that it can get out into the world!

I’ll be announcing the full title as well as a contest to win an autographed copy soon! Go here to be notified!

And if you haven’t read Viki’s first adventure, it’s available in both paperback and for the Kindle. You can also sample the first chapter FREE.

Thank you for the continued support!