Friday the 13th on the Night of a Full Moon

(Note: This is an old post from my former blog, and in honor of the Lunar eclipse and Halloween, I thought it was appropriate to repost it here.)

Today is Friday, June the 13th. We’re also supposed to have a full moon tonight. (Oh, and something about solar flares hitting the earth! OMG run!) Since there aren’t any cool theatres around me playing Jason or werewolf marathons tonight, I’ll have my own. While thinking about that, I decided to rank my five favorite “Friday the 13th” movies and my five favorite werewolf movies.

1. Part II – I’m pretty sure this was the first Friday movie I saw. I remember ‘burlap sack Jason’ very clearly. Once I saw the original, Part I, the opening suddenly made a lot more sense.

2. Part I – I’m a big fan of this one, despite there being no Jason killer. Mrs. Voorhees made a fantastic killer and still creeps me out. And the killer coda at the end is classic horror movie stuff.

3. Part IV: The Final Chapter – I really like this sequel a lot. I thought the character of Tommy Jarvis (Corey Feldman) was cool. He was a makeup and FX wiz kid who took on Jason in the end.

4. Part VI: Jason Lives – This one was always fun to me. And it’s the first time in the series that Jason is resurrected (via lightening).

5. Part V: A New Beginning – Despite not having – spoiler! – the real Jason present, only his persona, it’s a decent movie and sequel.

1. The Howling – Joe Dante can do no wrong in my eyes. It’s a shame we aren’t still getting a steady supply of creature features from him today. Most people prefer that “other” werewolf movie that came out at the same time. And they are both different enough to stand apart, but I’ve always preferred the dark humor of The Howling.

2. The Wolf Man – I love this movie. It’s atmospheric and short. It’s not as fancy as all the newer, FX heavy iterations but it’s a fun time if you’re into the traditional lycan lore.

3. Silver Bullet – Based on Stephen King’s book, “Cycle of the Werewolf”. This one is a lot of fun and has some intense moments that will have you gripping the seat of your wheelchair.

4. Ginger Snaps – This movie is a unique twist on the lycan curse being that it’s a metaphor for female puberty. It’s dark and twisted and a lot of fun. 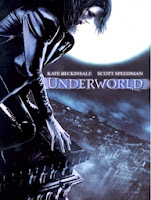 5. Underworld – I absolutely love this movie and its first sequel, Evolution. It gets bashed because of its use of CGI, but its style and atmosphere always keep me entertained. That, and I want to be Selene.

So there you have it! Probably not the most traditional list for these two categories, but who ever said I was traditional? Be sure to grab some popcorn and settle in tonight for a rip roarin’ good time! (And watch out for those fireballs falling from the sky…)