How I published a book while playing Fallout 4 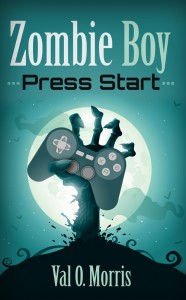 A lot of blood, sweat, and radioactive tears, that’s how.

I’ve put an insane number of hours into Fallout 4 since its November 10th release date, and I’ve put an equal number into editing, polishing, and publishing “Zombie Boy” in that same amount of time. To say my brain feels like someone used a Mesmetron on it would be an accurate statement. But, boy, does this feel awesome!

I started “Zombie Boy” in September at the request of my nephew. He loves the “Monster Girl” series and is a HUGE zombie fan, the biggest I know (and I know a few). He asked me, “When are you gonna write the ‘Adventures of Zombie Boy’?” Well, I couldn’t get that title out of my head, not to mention, who’s gonna say ‘no’ to such a request?

On November 11th, I finished the first draft of “Zombie Boy”, just one day after Fallout 4‘s release. What timing! (I wish I could say it was all planned, but it was a total accident. Ok, maybe a little planned.) And now, a month later, I’m happy to share “Zombie Boy” to the world!

Join Liam and his friends on an action packed, zombie-bashing adventure! For a limited time, “Zombie Boy” is on sale for $.99 (ebook). It’s available in Paperback and ebook at Amazon today, but I’m not stopping there. “Zombie Boy” will be available for iBooks and Nook very soon!!

Thank you to everyone who helped make this possible! My editors, Jessica and Susan; cover designer, Craig; to all the advanced readers: Rhonda, Viki, Roger, Tori, Lori, and Lori (that last part sounds like a cool all-girl rock band), and to anyone I may have forgotten (my brain is mush – again, see paragraph one, haha), I couldn’t do this without you!