“Murders in the Closet” – A Halloween Short Story 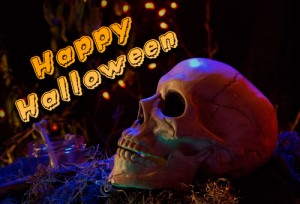 Happy Halloween! This is a story I wrote several years ago about a writer who is having difficulty capturing the essence of his villain. Originally, it was to be turned into a short film. Reading this story again, I can’t help but cringe. It’s a little rough around the edges and it was tempting to spruce it up before releasing it again. But I think it’s important to let the art live on its own as is. It was a learning experience just like the next thing I write will be. Rough or not, it’s still one of my favorites. I hope you enjoy it. *evil grin*

“Murders In the Closet”

Glen sat at his desk trying to will the words onto the page. They weren’t cooperating. The pitter-patter of the rain draining down the gutter spout numbed his thoughts. Motivation was rare these days and his latest horror piece was suffering. If he didn’t meet his deadline it would be the end of his so-called writing career.

His head turned slightly as his wife entered the room. He felt her arms curl around his neck then drape down his chest. His tense muscles responded to her warm touch. The fragrance from her perfume drifted over him like a soft summer breeze begging to take away the cold. He breathed in hoping the familiar scent would calm him.

“Have you decided how to detail the murders?” Her breath was soothing on his skin.

Glen loved his wife. She was the most beautiful being in the world to him and she was the one person whom he could always count on. Claire was a constant support for Glen and his career.

He shook his head, “I’m at a loss. My killer must be demented beyond logical thought. Beyond what the brain could comprehend. His killings must be more gruesome than the world has seen or it won’t work.” He threw up his hands. “Maybe my imagination isn’t as twisted as I thought.”

Claire thought for a moment. “Would you consider an outside source?”

He replied with what he felt was the only worthy response. “I prefer my ideas to be my own.”

“What if you were… encouraged? Free of charge.” The whole thing sounded more like a statement than an offer.

She had him now.

“I have never told anyone, but I’ve got a very detailed account of some murders that I was going to use as a story idea.” She shrugged a little on that last bit.

“You do?” He couldn’t believe what he was hearing. “That’s great, honey! Why have you never told me?”

Claire shrugged, “I guess I was saving it for a rainy day.”

The crackling fire warmed the den where Glen sat waiting on his bride to divulge her great ideas. The rain was still soaking the world outside. She entered the room carrying two mugs filled with hot chocolate.

Glen couldn’t take the waiting any longer. He eagerly reached for the mug and patted the spot next to him. “Alright, let’s hear it!”

“Alright. But this is for your ears only. As far as anyone knows, these are your words, your thoughts,” she said before taking a sip.

He nodded. Worked for him.

Claire took a deep breath and began detailing her story bits to her husband. She was careful to go slow, taking a deliberate pace and tone.

When she finished Glen looked like a kid in a candy store, wide-eyed and excited. “Honey, that’s fantastic! I am a little surprised that you wrote something so dark, but I love it!”

Claire sat there smiling, “It’s yours if you want it.”

“You bet I do! But this is so great, why don’t you finish it? Use it for yourself?”

“In my mind it is finished. I’m at peace with where it is now,” she said.

Glen didn’t share her feelings, but he respected her stance. As a writer, he felt nothing could be kept quiet. The story must always be told and there is always a story to tell. Every good writer knew that.

A breeze gently blew through an open window. Soft, sheen drapes wisped around recklessly. Summer had come and gone and the autumn leaves had begun falling. The country atmosphere was sometimes so quiet the leaves could be heard landing on the ground. There was a tinge of coolness in the air, but the sun continued to warm the late afternoon hours making it perfect southern weather for lounging around the back porch or tossing around the football. However, Glen was not outside. He was buried deep in his closet.

His book was released in early spring and had hit the best seller’s list. He was relieved that it was well received by both critics and fans. Claire was visiting her mother in Memphis which gave Glen some alone time. He was already hard at work on a new story. However, his attention was waning and he hoped searching through his old notes would give him renewed inspiration.

A sea of writing books and spiral notebooks surrounded him as he sat sorting through various boxes. Glen wasn’t sure what it was he was looking for, but he felt he would know it when he saw it. His intuition was right. He pulled out a leather bound book that was not familiar.

The corners of the book were old and worn yet somehow the brown leather still retained a mysterious beauty. Glen looked it over taking in its mystique. He fought the urge to tear through the aged yellowish pages and instead delicately opened the cover. The first page took him by surprise.

Bold words, a title, were splashed across the paper in black ink. Suddenly things weren’t quite so unfamiliar. Glen swallowed, forcing down the lump in his throat. He was timid, but he took the plunge. Word by word he felt his gut tighten.

After another few pages he allowed the truth to sink in. He dropped what he now knew as a journal like it had burned his skin. It seemed his wife didn’t just keep a very detailed account of any murders, but rather her murders. Glen scrambled to his feet. Panting, heart pounding. The room began to spin. The walls closed in around him. Deep breaths came by force. Composing himself grew difficult.

“This isn’t happening. It’s not possible.” He plopped down on the edge of their bed. Hands ran through his hair.
Glen stared at the journal. Suddenly, he strode back over to the closet where the journal lay and scooped it up. Turning around he jumped back. The visual was startling. Even more so than any detail he had ever described in his writing. He stood there with mouth agape and eyes wide. The journal met the floor again. He stared into the dark eye holes of a goat head mask. He heard a voice, evil and raspy.

“Miss me, Honey?” Staring back at him through those same holes were the black eyes of a killer.

“Claire.” He could barely get a breath out.

“Success wasn’t enough. You had to know more,” she taunted.

The sun caught a shiny object behind her back and reflected in Glen’s eye. “No, it wasn’t like that! I was searching through my old notes for inspiration and found…”

“Save it. I told you those words became yours.”

But it was too late. Claire couldn’t have her secret get out. “You know what comes next. How this story ends, right? Now that I’ve told you, I have to kill you.”

She raised the ax she had hidden behind her back.

The cold metal shined for the last time as it made contact with Glen’s flesh, hard and deadly. Once, twice more. The ax was familiar in her hands.

Blood splashed across the closet splattering clothes that hung innocently inside. Even the sheen drapes were assaulted. Stepping over Glen’s dying body, Claire stashed her journal in the closet, out of reach once again. The tragedy would be filed as a deranged fan attack. And Claire would escape conviction of a murderess once again.

However, little did she know that Glen also kept a journal. He always told her every good writer did.

Happy Halloween! Thank you for reading! I’ll have an announcement soon about my next book release!