Today marks the one year anniversary that I became a writer.

It could be debated whether the anniversary should fall on the day I started writing my first book or the day it was published, but I choose the former because it’s the day I took action.

Last Jan 12th was a mild winter day, very different from today’s rainy atmosphere. The sun actually peeked its warm face out from the clouds, and I found myself sitting on my deck relaxing with my dogs when the idea struck to write a ghost story.

I had been struggling to finish a movie script and was hoping to find inspiration to write anything and finish it. That was my one goal. Write a short book and FINISH it. Eight months later it was published and it sparked something that had been lying dormant inside me since childhood.

Notebooks filled with silly stories and poems written during my childhood and teenage years adorn my bookshelves. Those notebooks represent a time when I spent much of my downtime inventing my own worlds on paper. I guess I never really lost that. After all, we (my husband and I) have been writing and producing short films for seven and a half years now, but I needed more. Just days away from my 38th birthday and I finally know what I want to do with my life.

Writing a book has given me another way to tell stories and share them with others. A big THANK YOU goes out to everyone who has supported me, read my books, left a comment about what the stories mean to you, left a review, anything. It is appreciated more than you know.

I’m lucky to have many important people in my life, and one of those people was always adamant about two things: getting an education and reading. My grandfather isn’t with us anymore, but his efforts did not go unnoticed, which is why my first book is dedicated to him.

Viki and Herman will always have a special place in my heart since “Monster Girl” gave me new life, and I’m pleased today to share with you the cover and title for the sequel! 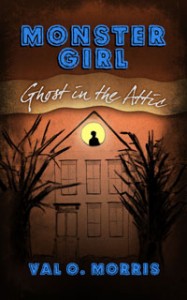 Monster Girl: Ghost in the Attic picks up a few months after the events of the first book. Full details are coming soon, but all signs point to a January release! Don’t forget, you can sign up to be notified about new releases. Now, I must go celebrate by polishing off the edit and writing 1,000 words in my third book!

A special thank you to Victoria Skye Cleveland for the beautiful illustration and to Craig Morris for the classy cover design!